Hola my Lovely Fans, I’m excited to tell you about my most recent adventure to MEXICO CITY! 🇲🇽

Having never been to Mexico City and wanting a weekend getaway, I jumped online and spontaneously booked a round trip to Mexico’s beloved Capital.

Upon landing in Mexico City, I was pleasantly astonished by how technologically advanced and clean the city was, far surpassing my imagination of what the city would look like. It was beautiful, charming and very well developed, including an incredible public transit system which was easily accessible for first-time travellers to the city 🚆 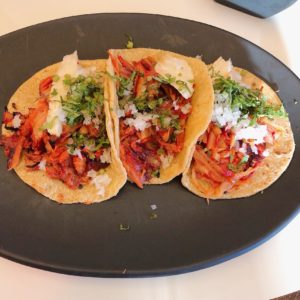 When I first stepped out, I was caught by surprise with just how cold it, this is due to the Capital’s elevation of over 7,000ft compared to Los Angeles’ elevation of only 268ft. This became very apparent when I was heading up the Subway’s stairs, it felt like it was going forever!

I am often asked why somebody like myself would you public transport instead of other modes, and there are three very good reasons!

1 – I LOVE saving money! 🤑 With the Subway system only costing $3 for all three days, this would have saved me hundreds had I been using Ubers and Taxis to get around town!

2 – Taxis can be notorious for long routing and taking advantage of unknowing tourists. With Busses and Trains, they have specific routes and set fares, so you know exactly what you are in for! Travelling solo most of the time, I prefer to play it safe, not be stuck in somebodies car, unable to get out in a worst-case situation.

3 – I enjoy experiencing new destinations as the Locals do. I was definitely the only Asian girl there and stood out amongst the wonderful people of Mexico City, but they use it every day, so let’s go on an adventure 🤩

On my first morning, I woke up early to make the 1-hour journey from my hotel in Polanco to see Mesoamerican Pyramids in Teotihuacan. It was an absolutely stunning location, such a breathtaking sight to see, it really makes me wonder how they were built, how long they’d take to build and how are they still standing after 2,400 years.

Unfortunately, I was unable to climb to the steps to the top of the Pyramid, but just being there to admire the history is a blessing enough 🙏

After a long 9 miles of walking around the historic sites, I needed to treat myself to some delicious Mexican food! I stopped at La Casa De Pastor and devoured their Al Pastor Tacos 🌮😋 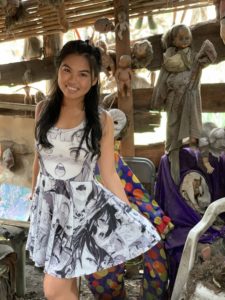 Cindy Starfall at The Island Of The Dolls

The following day, I finally got to tick off one of the biggest things on my bucket list, La Isla de las Muñecas, The Island Of The Dolls! This is known worldwide as one of the most haunted places on Earth. Back in the 1950s, the original owner of the island began placing dolls around the island to ward off the spirit of the young girl who drowned nearby.

After a long two hour ride in a traditional Mexican Trajinera, we arrived at the Island. Covered in cobwebs, insects and native flora, the dolls were extremely creepy, keeping an eye on you every step of the way, every sound on the island making me nervous. It makes me curious to know what would happen if I stayed on the Island overnight 👹

After the Island, I decided to cap off my night with a delicious Churro from El Moro, what better way to end the trip than with Mexico’s favourite dessert!

Overall, my trip was short, sweet and spooky! This time I was unable to attend a Soccer Game or see high flying luchadors at the Wrestling all due to COVID, but I will be back as I still want to visit the Magic City of Puebla! So until next time Mexico, Adiós 💋

Stay tuned to My Blog for all my Adventures 🌍